I'm too full to eat it, but here is Tim's birthday cake: 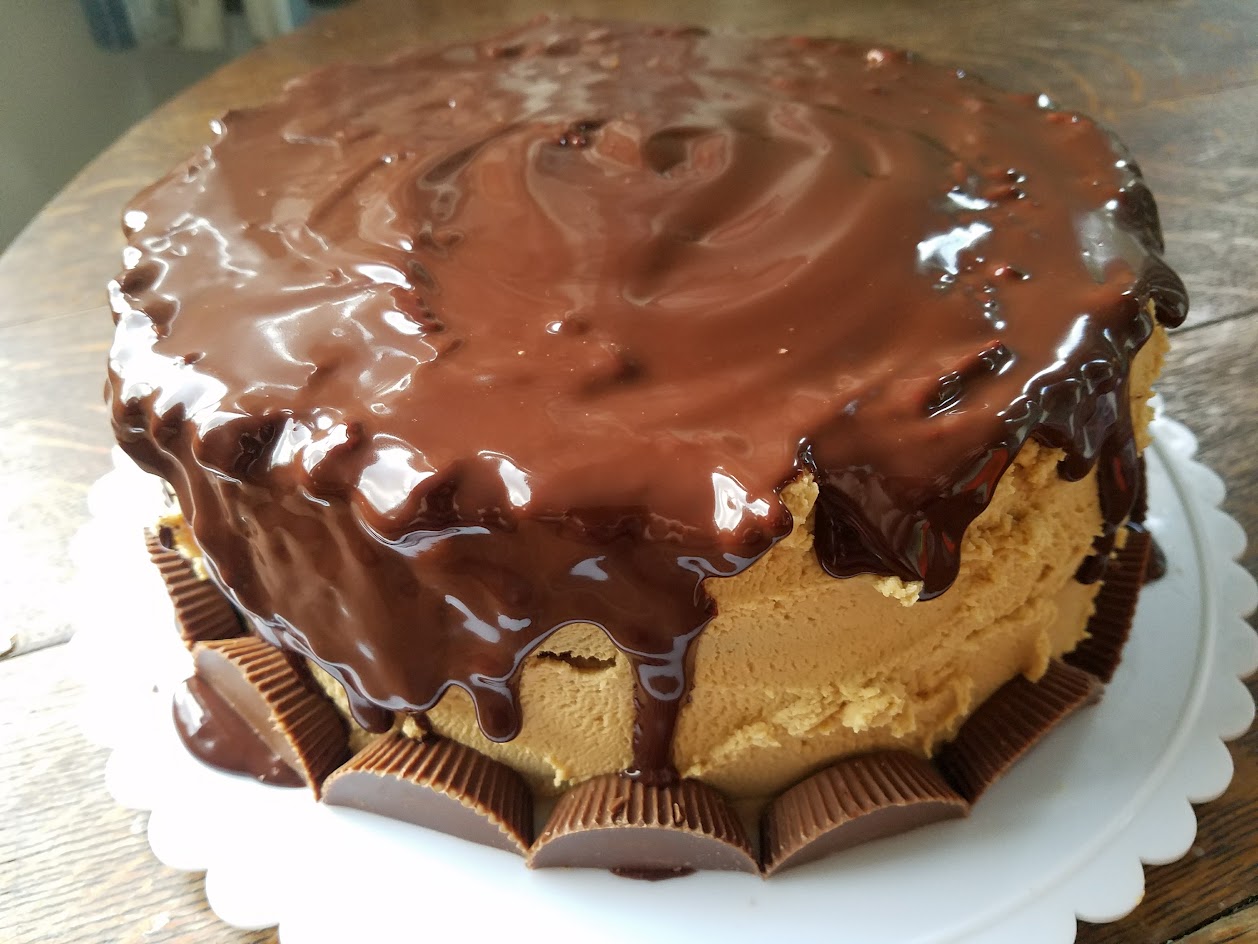 For the last couple of years I've been using a computer that's mission in life is to break my spirit.  It took five minutes on average to load a website, outright refused to load google maps, and often stopped working right in the middle of a simple request for information about the weather.  Trying to write a simple blog post took far too long, and on occasion I wasn't even able to add pictures because my snobby computer was too good for them!  But no longer!  I am liberated from its maniacal grip and am no longer subjugated to its evil whims.  I now have a computer that fairly wags its tail when I ask for directions and leaps to obey my every command!  I don't know that I'll post any more often because of it, but I will be a lot happier when I do.  I'm pleased to introduce my new (and shiny) Acer Chromebook 14. Get Your Own! Affiliate Links:
Acer Chromebook 14

I'm in a Yellow State of Mind!

After the first coat of yellow primer my bookshelves are looking decidedly cheerful! 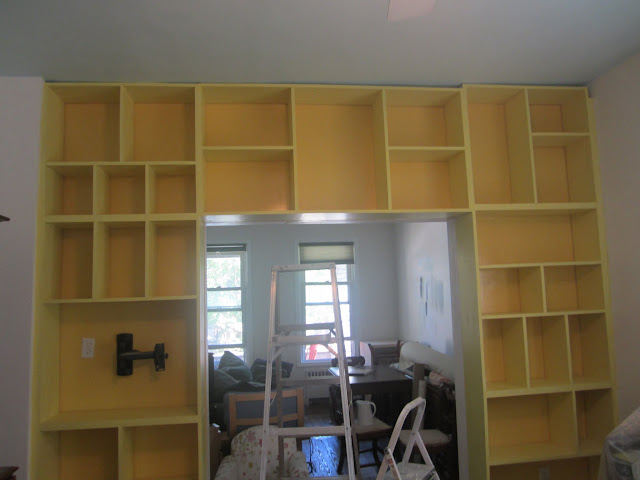 As you can see, the yellow primer is much lighter than the yellow of the wall.  Eventually all of the bookshelves will be that same darker yellow.  Here's a close up to see the difference in color better: 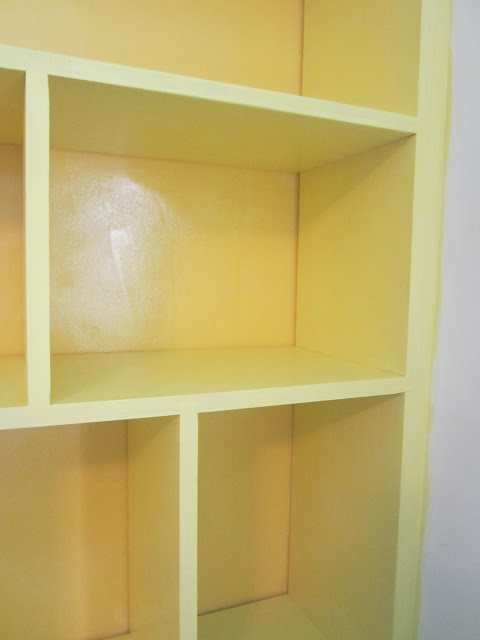 After painting the primer on the shelves it was much easier to see all of the areas where I either forgot to putty, or where the putty job was simply sub par.


I've started actually painting now, I'll give you an update on how well my attempt to smooth out the shelves works once I slap a coat of extra shiny paint on top of it!

Email ThisBlogThis!Share to TwitterShare to FacebookShare to Pinterest
Labels: built in bookshelves, LivingRoom

Last night my heart just about stopped.  I was sound asleep when Tim woke me up at about 3:15am.  He was just coming home from work and heard a racket coming from the chicken coop; squawking, rattling, etc...  He snuck into the house to check the situation out from a safe vantage point, fearing potential skunk spray or raccoon attack.  He saw a little raccoon hand come out of the nesting box and the lid bang around a bit.  That's when he came up to get me.  As soon as I heard that there was a raccoon in our coop I knew that at least one of our chickens must be dead.  Raccoons rip chickens apart in a very gruesome manner.  I read so many books about chickens before getting our three little ladies and every book discussed raccoons as one of the predators we needed to look out for.  That's why our coop looks a bit like Fort Knox.  We have hardware cloth attached to everything.

The coop also has locks on everything!

This leads to the question of how on earth did a raccoon get into the coop!  Well, I think I locked him in there.  We went to a Chicago Fire soccer game and got back around 10 at night.  We've had the chickens for a year and four months and haven't had any issues with predators other than hawks, and even those have never actually made an attempt on our birds.  So we've gotten a little careless and allow our ladies to wander around their yard whether we're home or not.  The chickens put themselves to bed at night and then we go and lock their doors behind them.  When we came home at 10 at night the chickens were already in bed and I'm pretty sure me walking into their run scared the raccoon into it.  Then I walked right up to the coop and locked the door; raccoon, chickens and all!  Five hours later Tim finds the raccoon in the coop and here we are, racing downstairs grabbing random water bottles and other brick-a-brack in my panic (I'm not entirely sure what I meant to do with it).  I run out while Tim shouts that we don't want to get bitten by this raccoon.  He runs back inside to grab a broom while I turn on the hose and make sure that it's set to jet.  Tim unlocks the side of the coop and uses the broom to open it while I stand at the ready with the hose.  We were both majorly freaked out, expecting to find a charnel house.  And there, sitting on the roosting bar along with Paulie and Violet was the raccoon.  Twinkie was standing near the door, probably dislodged by the raccoon who tried to climb and hide when it heard us coming.  I turned on the hose and sprayed everybody in the coop.  Twinkie flew out, the raccoon disappeared into the rafters of the coop and then came running out after I sprayed up there also.  It came right at me so I sprayed it in the face, it veered towards Tim before hightailing it out under the gate towards the alley.  We collected Twinkie, locked the girls back up, and then I spent a long time lying in bed trying to get my heart to beat at a normal pace so that I could fall asleep.  The raccoon was just a juvenile, otherwise I'm sure the outcome wouldn't have been so good.  It even ignored the two eggs that had been in the nesting box!  If we hadn't been so scared about what we'd find in the coop we could have video taped it, it was pretty funny seeing that raccoon roosting along with our chickens!  Now we have to be much more careful with our girls.  Lock them into their enclosed run when we'll be away at dark and use a flashlight to make sure the coop doesn't have any unwelcome visitors before locking it at night.  I guess this whole chicken raising thing had been too easy.  Lucky us, it just got more interesting!
Posted by Molly at 5:35 PM 3 comments:

Email ThisBlogThis!Share to TwitterShare to FacebookShare to Pinterest
Labels: chickens

Sofi Sue is growing out her bangs and they are constantly in her face.  I grabbed some cheap plain headbands from Target and decided to fancy them up a bit.  This was pretty easy to do since the headbands were covered in fabric.


I grabbed my jar of fabric flowers and ribbon bows (everyone has one of those in their craft room, right?). 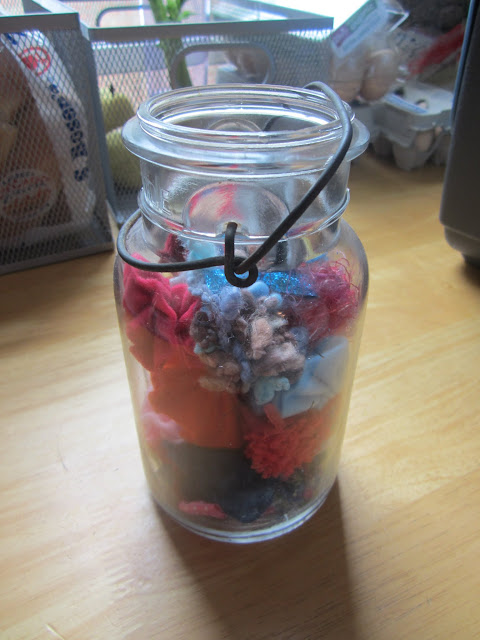 Sofi Sue sewed a pink flower to one of the headbands and I added some bows and poofs to a few others. 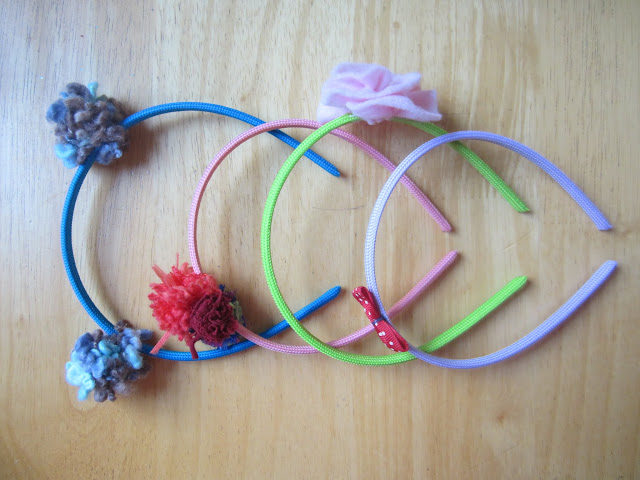 Most of the time Sofia's hair is still hanging in her eyes, but now she has the option of getting it out of her face in style.
Posted by Molly at 2:25 PM 2 comments: