When planning Sofia's room I decided it would be nice to have a curtain to section off the area underneath the loft.  This way we can hide any mess Sofia makes under there.  I also thought it would be a fun little area to play where you can close yourself off, almost like a fort.  So I took a white sheet and cut it to size.  I only had to hem the bottom because the other three sides were already finished.  Then I prepared a space in the basement to decorate the curtain.  First I protected the floor with painters paper.  Then I taped the curtain down flat so that I could draw on it with permanent markers. 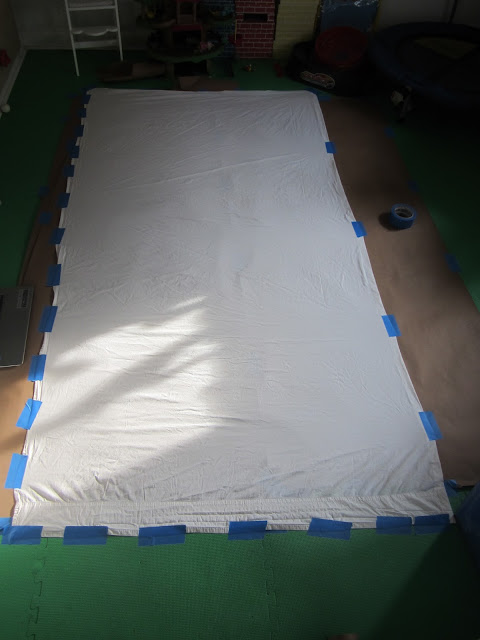 I wanted to draw an easy forest scene so I copied some birch tree wallpaper and a fox that I had seen online. I drew the outlines of trees 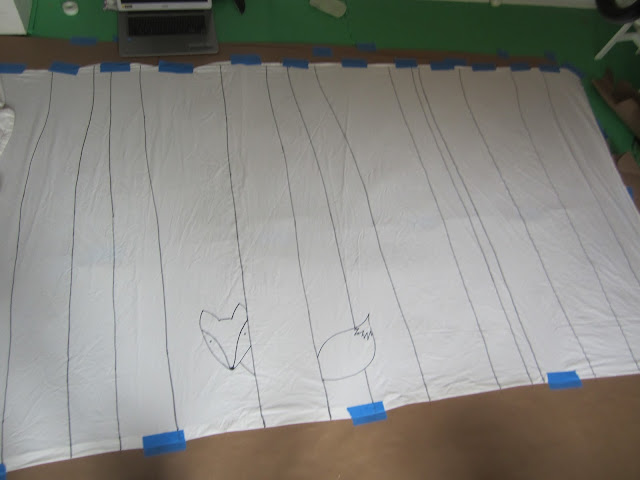 and then added the details. 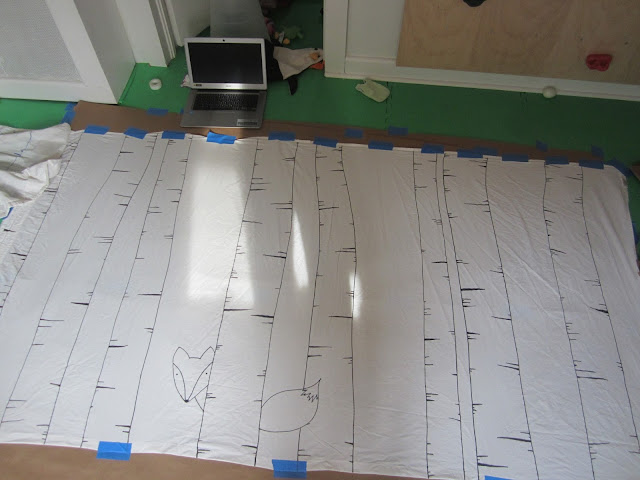 After that I used acrylic paint and watered it down a lot. 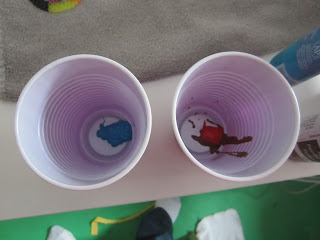 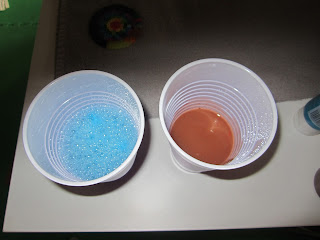 I got this method from Filth Wizardry.  I painted the sky between the trees, leaving the trees the white of the sheet.  I used red and brown for the fox. 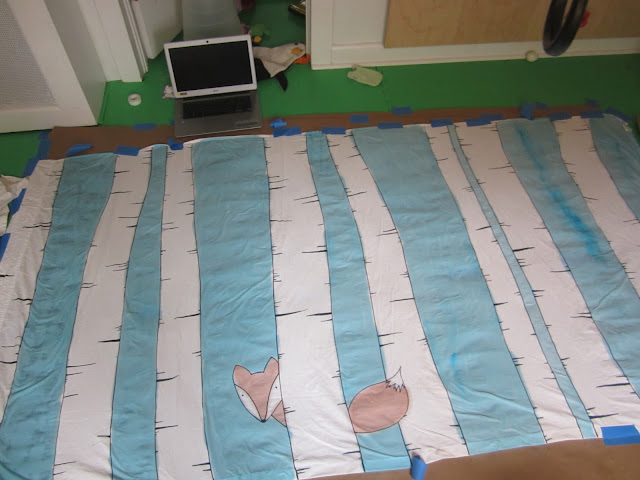 Notice how I did not draw in a body for the fox.  I made a practice picture on the part of the sheet I cut off, just to make sure that this was going to work.  My fox body was pretty sad, and the fox legs and feet were just horrendous. 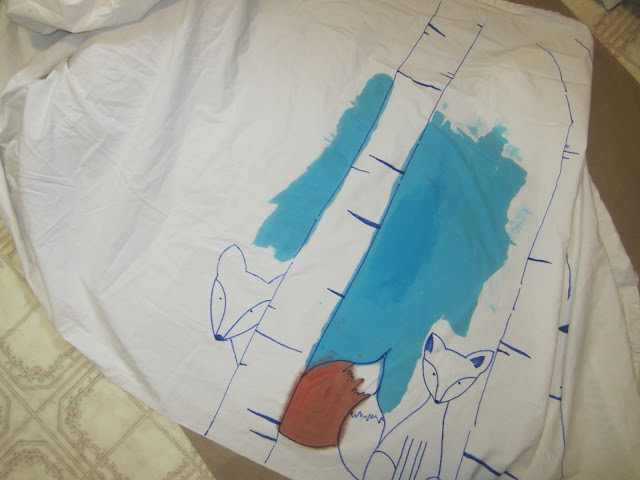 So, now the fox is hiding behind a tree.  Problem solved!

There is one thing to note about this method of painting.  Since the paint is watered down the end result is that the paint bleeds.  So if you paint up close to the edge of a tree with blue and don't go over the edge, after a couple of minutes the paint will bleed over the edge. 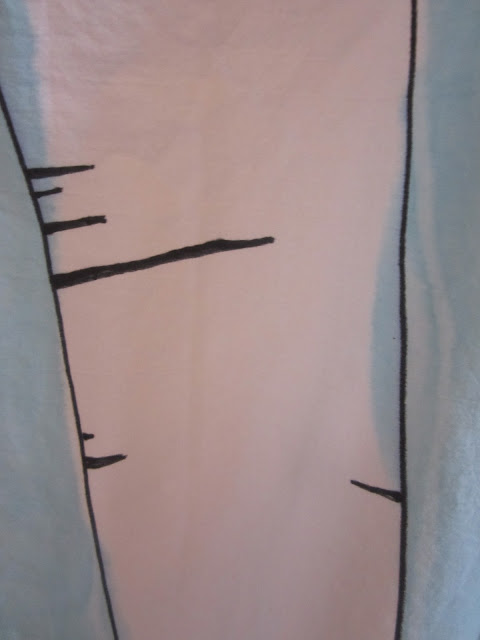 I actually don't mind this, I think it makes the whole thing look like watercolors.  It's very pretty.
What I love about this method of painting on fabric is that it is cheap and it leaves the fabric soft.

After the curtain dried I threw it into the dryer on high heat to hopefully set the paint.  Then I attached it to Sofi Sue's loft.  I had already purchased a tension rod from Ikea along with curtain clips.


I just clipped the curtain up and it was done.  I'm pretty happy with how it turned out and Sofia gave me glowing praise, although delivered very tepidly after I asked if she liked the curtain.  She told me she didn't like it, she loved it.  I'll take that. 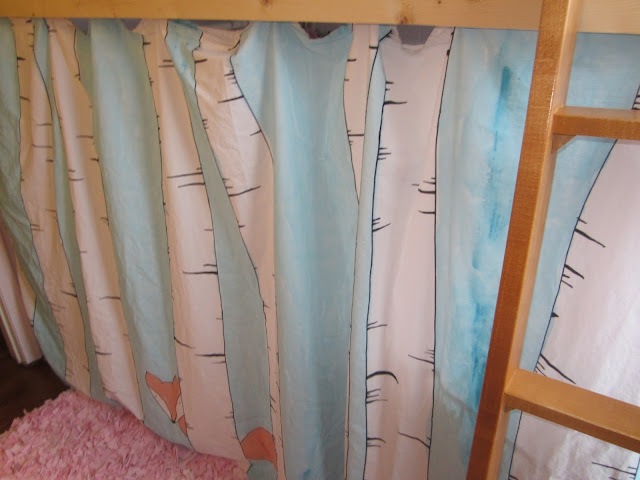 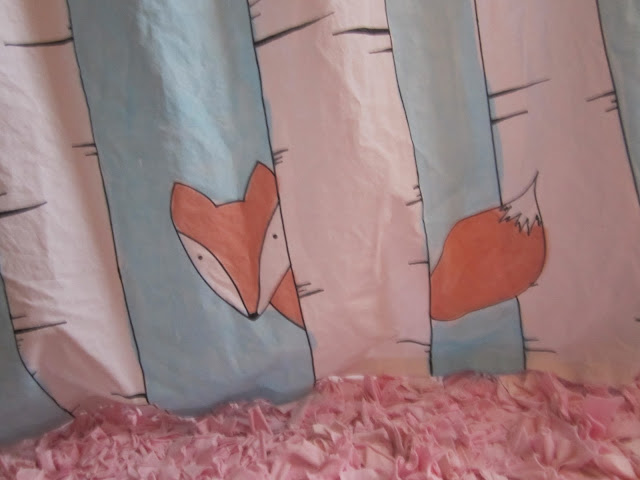