Kitchen Floor Failure (How not to paint vinyl floors)

I am not a huge fan of carpeting, but clean and installed in the last decade carpeting I can live with.  I have nothing against ceramic tile although brown wouldn't be my first choice.  I wouldn't install parquet flooring myself, but I think some people pull it off nicely.  Beige linoleum is not terribly attractive, but at least it kind of fades into the background.  Vivid blue linoleum doesn't fade, unfortunately.  None of these flooring options would be in my top 10 and all of these floors were combined on just the first level of my home.

I got to work immediately tearing up all of the carpeting before moving in and decided that this would be a great time to try something I had been reading about on the internet for a while.  Instead of having two different colored and patterned linoleum floors in my kitchen I would paint them both the same color.  It would still be linoleum, but at least they would match!  I researched the idea, talked with the paint guy at Home Depot and got to work.  I first cleaned the floors with TSP and then roughed them up a little with sandpaper.  After that I put on two coats of light grey concrete and garage floor paint.  I spent hours taping off a random herringbone pattern and then painted it in darkening shades of grey.  When I was all done my back was killing me, but the floor looked awesome! 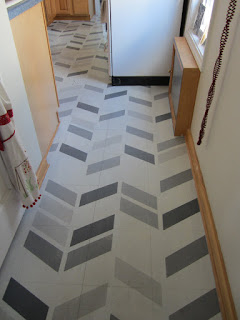 Following some bad advice I did not end up sealing the floor after painting it.  Even though this paint is meant to be driven on by cars, it evidently isn't meant to be painted on linoleum and then walked on by a family of four.  Two issues I encountered with my beautiful new floor almost immediately were that it scuffed very easily (I found this out when moving the refrigerator back into place) and it was almost impossible to clean properly.  The paint seems to suck up the dirt and food that inevitably finds its way into a kitchen when you have little kids (and let's face it, I'm almost as messy as the kids are).  So now I have small scuffs by the sink, more scuffs where the new stove was moved, and a general haze of dirt over everything punctuated by food stains here and there. 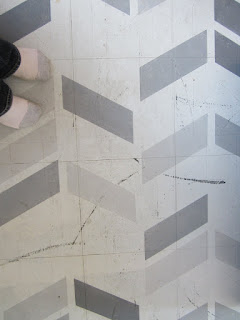 It's an embarrassment every time I have people over.  With new flooring not in the cards in the kitchen until we eventually redo the entire thing I'm considering repainting and sealing the floors just so that I can have people in my kitchen without cringing.  I'll let you know if I ever get around to it!
Posted by Molly at 6:03 PM