I currently have 9 paint colors on the walls in my living room.


And I have 10 colors on the wall in the dining room. 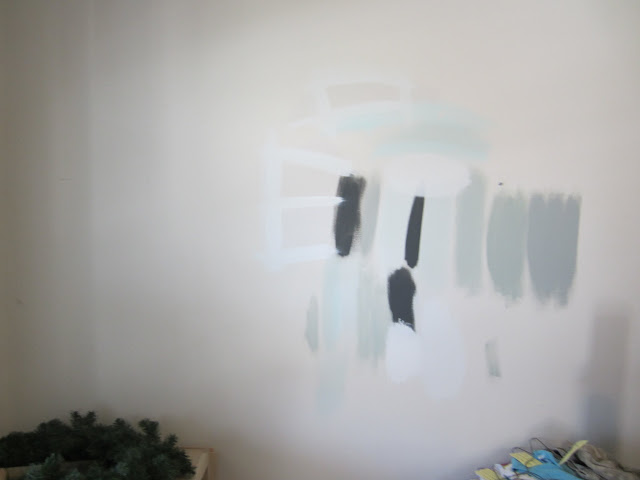 I actually decided on the dining room color pretty quickly, but every time I come up with a new contender for the living room I have to put it up in the dining room as well to make sure that it doesn't clash.  The two rooms have a large opening connecting them so I want to make sure that they go together well.  This was not something that I ever bothered with in the old house, which is how I had bright yellow, red, chocolate brown, orange, mossy green, and dove grey all on the same level.  I love color, but I think that for this new house I will try to be a little more grown up with my paint choices and not just splash the rainbow willy-nilly on the walls.

I had originally decided on a light grey for the living room.  It took me months to decide on Sherwin Williams Eider White.  But even after deciding that it was the grey that I liked the best I still felt uncertain in my choice.  Finally, yesterday, I realized that the reason I was uneasy was that I had made the wrong choice!  Funny how that works.  I have already painted my ceiling in both the living and dining rooms a nice light blue.  Putting a light grey on the wall sounds nice in theory, but in our old home our bedroom was light grey with a blue ceiling and I never did like how it looked.  That ceiling was a lot darker, more of a turquoise, but it always felt very cold to me.  I just didn't like the combination.  I don't know why I thought I'd like it better here.  If I hadn't painted the ceiling blue and had done a nice white instead, then the light grey would have looked awesome.  But the ceiling is blue, and the built in will probably be yellow, so having a grey thrown into the mix seemed too much to me.  I realized that what would look excellent would be white!  Painting a room white would have been sacrilegious to me 5 to 10 years ago, but now it just seems like it would be so fresh and bright.  I've already painted all of the basement white, mainly because I put in bright green foam floors and felt that I already had reached my color quota on the flooring.  But I like it, and although I am not prepared to go white in every room of the house I do think it will look nice in this situation.  Now, to decide which color white!
Posted by Molly at 6:16 PM