Behr Marquee vs Behr No VOC Paint and Primer in 1

I've been painting my own walls for the past 14 years and I pretty much always bought whatever the cheapest Behr paint was at the time.  Since having kids I've opted for the no VOC paint and primer in 1 so that I wouldn't have to worry about painting in winter time with closed windows.  For some reason, on my last trip to the Home Depot I decided to give the more expensive Behr Marquee a try.  The paint guys behind the counter recommended it and I had seen a ton of commercials online (I watch a lot of home improvement shows on the internet) that showed Marquee covering a dark purple wall with a violet paint in one coat.  I was painting my dirty off white walls in the living room Benjamin Moore's Simply White (color matched to Behr, of course).  Although most of the walls were already a whitish color, there were a few spots where I had tested out potential paint colors which weren't white. 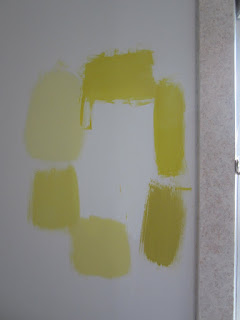 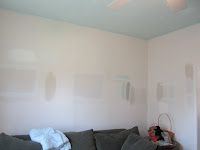 I had high hopes but had still given myself enough days for a second coat, just in case.  Here are the walls after coat number one: 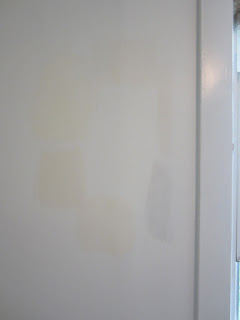 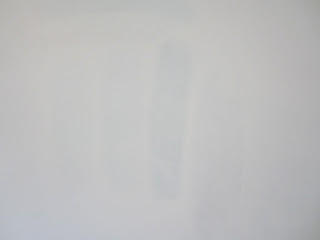 As you can see, the yellows and the blue/greys are both still visible.  So I did coat number two: 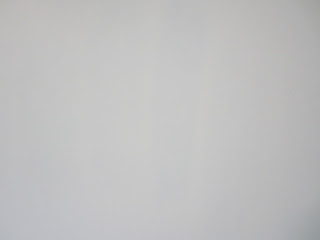 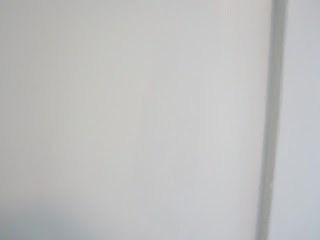 It doesn't translate to my poor photography very well, but there are still faint outlines of yellow and blue/grey showing through the second coat.  I had to go ahead and paint over just those spots for  a third coat before they disappeared.  And even painting over the off white walls the second coat was definitely necessary.  In future, I don't think I would shell out the extra bucks for Behr Marquee.  If it had covered in one coat, as promised, then it would have been worth the money.  If I have to paint two coats either way, I might was well save some money and go with the no VOC option.

Email ThisBlogThis!Share to TwitterShare to FacebookShare to Pinterest
Labels: behr marquee vs behr paint and primer in one, LivingRoom