Building a Raised Garden Bed for $15

Last year I tried to start a garden in the backyard.  I began by starting seeds indoors and then transferred them to a small area in the yard where I removed the grass.  I must have done something wrong because the only plants that survived and thrived were three tomato plants.  The rest of the plants died almost immediately or were choked out by weeds.  This year I have decided to keep the tomatoes where they were last year but I also want to add some raised beds.  Although I prefer the look of traditional gardens I like the idea of a method that requires less work.  However, I am extremely cheap and don't want to shell out the money it would cost to buy a prefab raised bed, or even to buy the materials for a do-it-yourself raised bed.  So I went to Craigslist and stalked the free section for months collecting as many old bricks as I could get my hands on.  I did end up purchasing weed blocking landscape fabric to put under the raised beds and a landscaping adhesive to stick the bricks together.  I bought THIS TYPE of adhesive that looks a lot like a tube of caulk.  I got the tube home and went to put it in my caulk gun.  That's when I realized that I was going to need a bigger gun!  I went back to Home Depot and bought this bad boy!


I laid out the landscaping fabric and started placing my bricks. 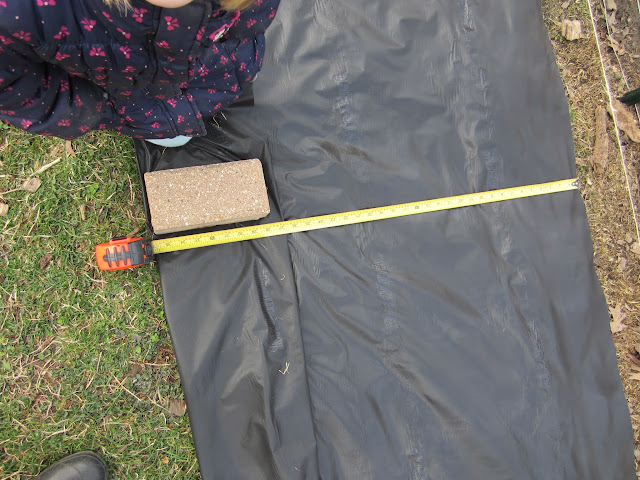 I wanted each bed to be around six feet long and three feet wide.  I'm hoping to fit three beds along the chicken's fence.  I feel that my way of building the raised beds must be the most slap dash method in existence!  I eyeballed the whole thing and was halfway through with the first bed before I even knew it.


It is at this point that I realized I should have planned better.  I like the way my raised bed looks, kind of old and worn, but when you don't plan in advance you inevitably run into trouble.  I completely neglected to prepare the bricks.  These are old bricks.  Most had been stored outside for years.  I was having so much fun building the wall and was in such a hurry to get my beds completed that I didn't think about the fact that these bricks were dirty.  When gluing them together with the landscaping adhesive some of the bricks had so much dirt on them that the adhesive was sticking to the dirt instead of the bricks!  I decided to wait until the curing time for my adhesive was over and see if my walls would remain standing.  Luckily, most of the bricks were stuck tight, but a few came right off in my hands.  I took a few days to spray down the bricks to clean off the majority of the dirt before continuing.


I also stopped by my friend's house to collect a few more bricks.  After cleaning them all I got back to work. 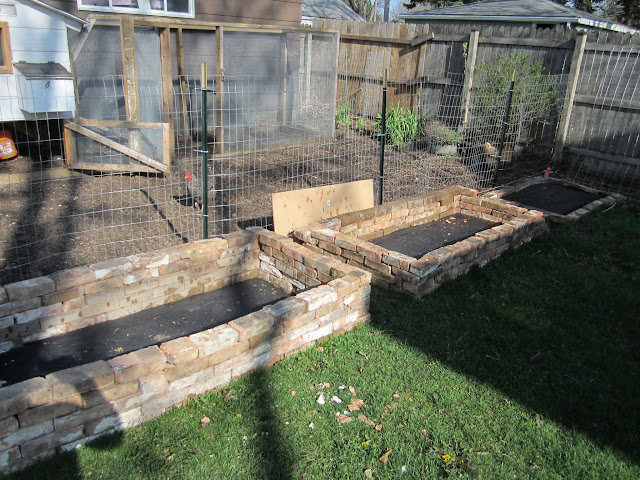 Note the wood board behind the second raised bed.  My chickens are dumb as rocks and were actually eating the landscaping adhesive.  None of them suffered any ill effects, but now as I work I have to put this out to block the chickens from sticking their heads through the fence and eating glue. 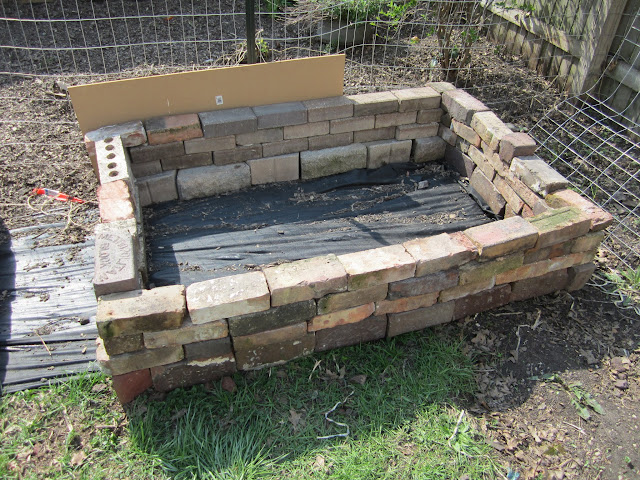 By the third bed my garden walls were looking pretty wonky.  The bricks for this one were not all the same size and the ground is a bit uneven here.  Oh well, as long as it holds dirt I'm fine with some wobbly walls. 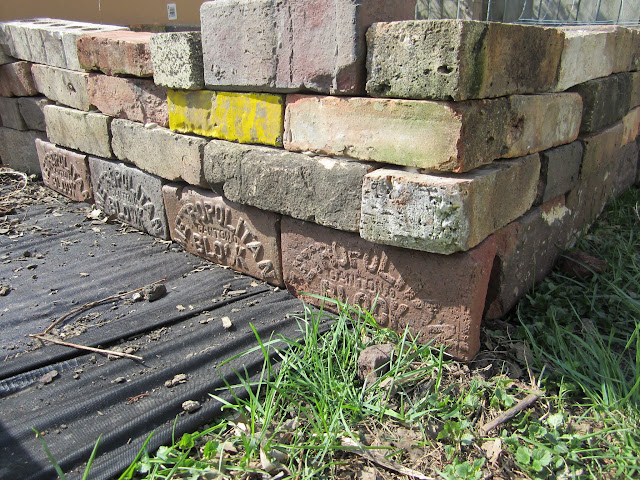 I love the detail on these bottom bricks (thanks Nicole!) and the bright yellow one makes me smile. 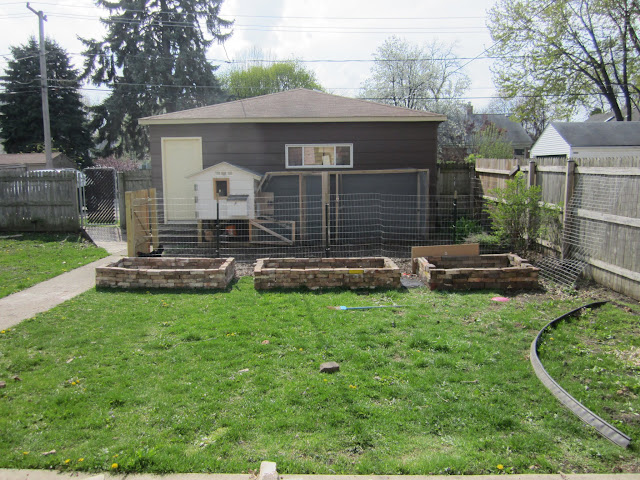 The raised beds aren't quite as tall as I wanted.  They are supposed to be at least twelve inches high and these are only eleven.  I ran out of bricks and am feeling antsy to fill them up and get planting.  If I find that they are too short to work well I can always add more rows of bricks next summer.  Now let's see if I can grow anything other than just tomatoes this year!