Tomorrow is our block party.  I'm super excited about this because in our old house we couldn't have a block party.  The police might have frowned upon our blocking off four lanes of traffic to set up a bouncy house in the middle of the street!  But we now live on a nice quiet residential street and public works dropped off our barricades today!  So tomorrow the kids will bounce away.  And the adults will have a bags tournament.  Of course I need a bags trophy!  I've been stopping by Goodwill more frequently than I usually do lately in search of an unwanted trophy.  Sadly, there have been none.  I was briefly given hope that my brother in law's old trophies were available, but it turns out that they were mostly thrown away.  So my hopes of cutting a bowling ball or golf club off of the tiny trophy man's hand and gluing on a small bean bag have been dashed.  Then I decided to just make a large bean bag and that would be the trophy.  My genius niece, Maddy, suggested writing the winner's name on the trophy each year and having them return it the following year so that a new winner could be crowned.  So I quickly embroidered some fabric that has been laying around for more than 10 years and made the perfect trophy in time for tomorrow's festivities.  I'm super excited for our block party! 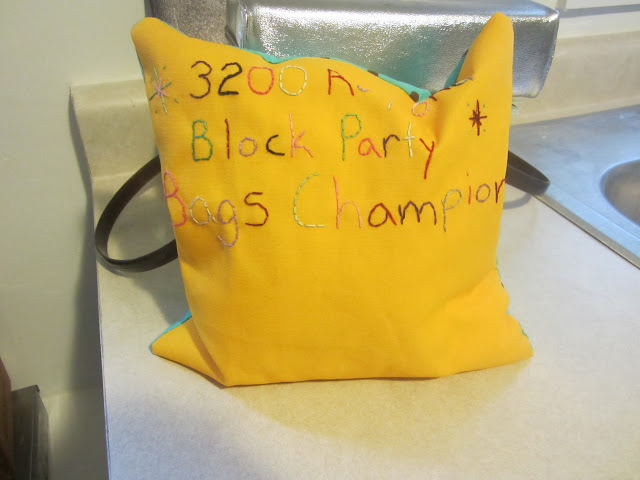