I was forced to make a princess canopy, and it turned out pretty cute!

I am not a fan of the princess canopy that a lot of little girl rooms have hanging over the bed.  My plan for Sofi Sue's room was to paint a cool headboard on the wall behind her bed and call it a day.  But Sofia had different plans.  While hitting the bathroom at a furniture store (we were looking for a couch but it's imperative that we visit the bathroom in every store we go in) we had to walk through the children's section.  They had cute little bedrooms made up to show you how you could use their furniture in your house.  Sofia saw a princess canopy in pink, white and purple and insisted that she had to have it.  In her words "I'd feel safe sleeping in my own room if I had that!"  Have I mentioned that Sofia is an expert at manipulation?  Because of the setup of Sofi Sue's bed we couldn't do the traditional long and flowy canopy.  The mattress is so close to the ceiling because of the loft, so I had to do a truncated canopy.  I chose white because I knew the rest of the room was going to be filled with a lot of color.  But I wanted it to be fun so I also made a rainbow colored border.  Here's the end result: 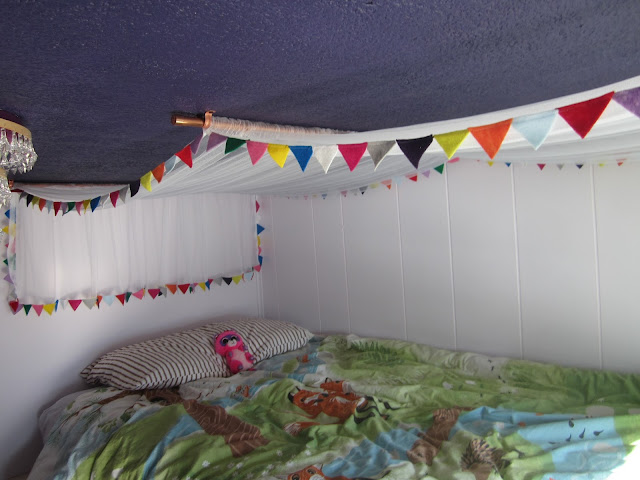 It's impossible to get far enough away from the bed to show the entire thing at once, but you get the idea.  I bought several yards of mosquito netting and sewed channels in the middle and close to both ends.  I cut a million multi-colored felt triangles and sewed them along the edge like bunting.  Then I used a copper pipe from Home Depot (cut into three equal parts at Home Depot) to attach the netting to the ceiling. 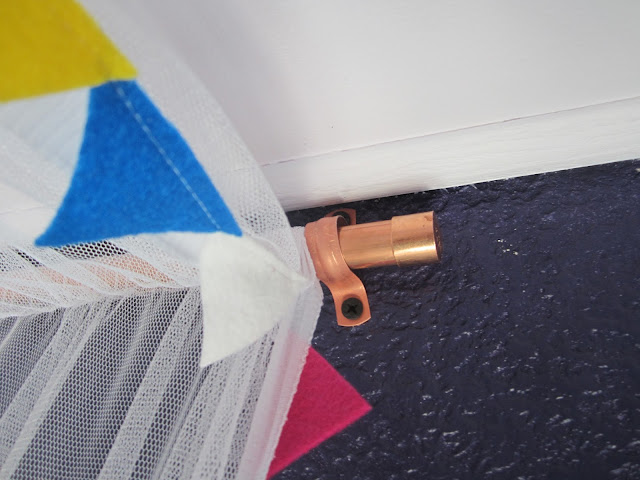 I ran the pipe through each channel I had sewed and then capped the end and attached it to the ceiling with this little copper piece I found near the pipe in the plumbing section.  When I first attached the canopy to the ceiling I realized that it was far too long and the swag allowed the fabric to dip halfway to the mattress.  So I took everything off, cut about 18 inches out of the middle of the fabric, sewed it back together and sewed a new channel for the pipe to go through.  Now the swag is just right.  Sofia let me know it wasn't what she wanted, but before going to bed tonight she finally allowed that it was way better than she had thought it would be.  That's something.  At about $22 this project is the most expensive purely decorative piece in
Sofia's room.  It makes me cringe to spend that much on a non-functional item when the painted headboard would have been so much cheaper; but as it is Sofi Sue's room I suppose it makes sense to let her choose what she wants in it!