I wanted to fit some bookshelves into Sofia's new bedroom so that she could put her library books up there as well as any books that are her particular favorites.  That way if she wanted to hang out by herself in her room she'd have something to do.  The problem is that her room is spatially challenged.  The only possibility was to hang narrow bookshelves on the one empty wall in the room.  In the kid's old bedroom I had hung rain gutter bookshelves that I loved.  You can kind of see them in this picture, evidently I never actually took a finished picture of them.


I used the instructions at Sunshine on the Inside.  Here are her shelves:


The problem with those is that they aren't as cheap as you'd expect.  I wanted four roughly four foot bookshelves.  If you bought two gutters at $4 each and cut them in half that would be four shelves for only $8.  Sounds great, but you also need end caps for each shelf and at almost $8 a cap that puts the final cost for 4 shelves at around $70!  This time around I decided to look for a cheaper option.  Now that I'm no longer scared of power tools I realized that it wouldn't be that expensive to just make wood shelves.  I bought 1X4s and 1X2s and just glued and nailed them together.

After sanding off the edges to make sure no one would be impaling themselves on the shelves I painted the backs purple.  Since I already had the purple paint from my laundry room counter my only cost for the project was the wood for the shelves.  All 4 shelves ended up costing a little over $20.  And they don't look half bad! 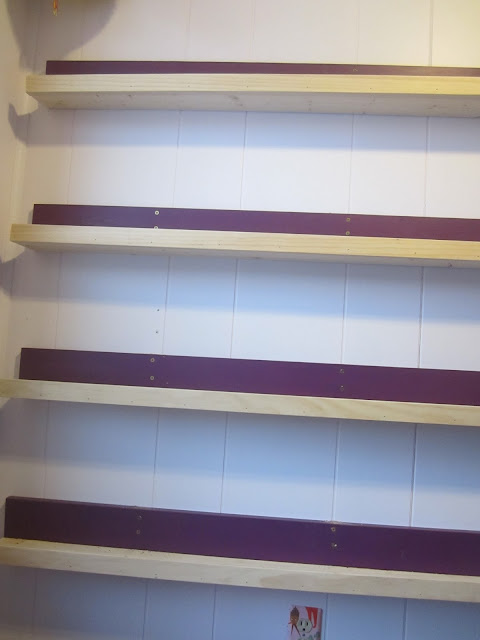 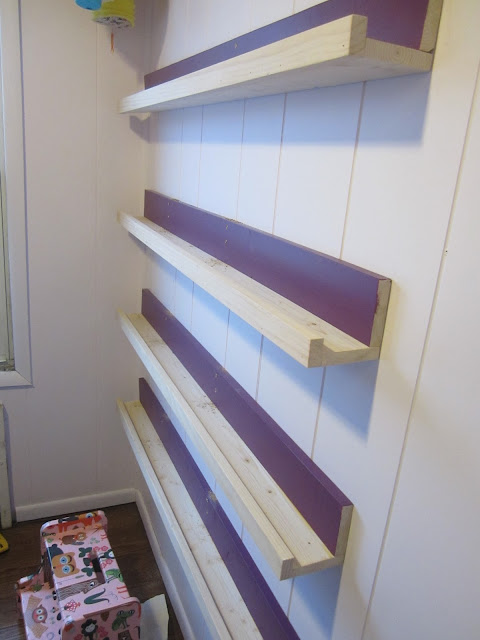 Adding some books to the shelves will cover up the screws.  I also have to fix a couple of holes that I accidentally drilled in the wrong spot in the wall and on the shelves.  I'll show the shelves filled with books once I have everything else in the room completed.